In the examples we’ve seen so far, going upstream is relatively easy. A reputable source includes information about its sources. Just as it’s important for scholars to cite their sources, journalists need to tell their readers where their information comes from. Even when a source is not identified by name, it’s typical practice to say why that person isn’t named while also indicating why they are in a position to know something. For example, a story might quote an official who would be fired if his name was published or a police officer who was a witness to the event but was not an authorized press liaison. The Times, in the interest of transparency, has an explanation of their rules for these circumstances. Generally, though, sources are identified so readers can assess their credibility.

This is not just a journalistic standard, it’s good internet citizenship. Articles on the web that repurpose other information or artifacts should state their sources, and, if possible, link to them. This matters to creators, because they deserve credit for their work. But it also matters to readers who need to check the credibility of the original sources. Unfortunately, many people on the web are not good citizens. This is particularly true with material that spreads quickly as hundreds or thousands of people share it – “viral” content.

When that information travels around a network, people often fail to link it to sources. For example, here is an interesting claim that President Trump is more accessible to the press than previous presidents, and that this fact contradicts a “media lie.” 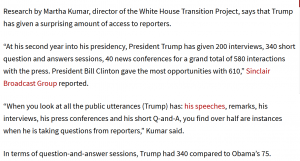 The article links to a news broadcast as its source. That source quotes a researcher, Martha Kumar, and the organization she’s affiliated with, but doesn’t link directly to her research. The next step is to see if the original research is available at her organization’s site. This turns up a report on how presidents communicated with the press, comparing their preferences in the first hundred days of their first and second years. It turns out the claim of “50% more access” relates to specific kinds of press interactions.

Where the presidents differ is the venues they choose to meet with the press, including press conferences, interviews, and short question and answer sessions. President Trump, for example, routinely responds to a few questions every day or two while President Obama favored long form interviews where he could discuss policy. . . . [Trump focuses] on those forums and strategies that help him establish a narrative for the day – Tweet in the morning for the opening narrative and expand on it later in the day – and get others to talk about policy. In a sense, it is a loop that has him begin in early morning by tweeting and then build his narrative in answers to reporters’ questions at the beginning or end of White House meetings with officials and outside guests, such as corporate executives. (executive summary and p. 4)

In other words, he has had more informal, unscripted interactions than other presidents, including tweets, but fewer formal opportunities for reporters to question white house officials.

The process of going upstream – checking out the source – will also establish that Sinclair Broadcasting Group is known for its right-wing editorial stance. But this isn’t entirely a right-wing issue; an opinion piece in the Washington Post described the report differently, but didn’t link to the original, either.

Another factor to consider when going upstream by following sources is research conducted by Yochai Benkler, Robert Faris, and Hal Roberts that found close network relationships among a group of right-wing publications, including Fox News, talk radio, and Breitbart. These outlets  tend to draw on one another as sources, amplifying and confirming messages consistent with a partisan identity while also inducing distrust of media sources outside their circle. In contrast, consumers of left-wing partisan information sources also consume mainstream news sources that put a higher premium on performing objectivity and fact-checking, so the power of left-wing outlets to carry a strongly opinionated message is moderated by the more cautious mainstream.