My sister, Diane Celeste Simonian, was born August 14, 1961, so I don’t remember any of my time as an only child. People would sometimes ask if we were twins! We did not really look that much alike, but both of us had dark brown eyes and hair, worn in the same style when we were little. 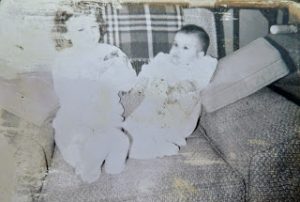 We had long since moved out of Auntie & Uncle Clay’s, and then moved to a house in Deerfield, IL to have enough room for Diane. I have a few fleeting memories of that home, one of my dad making pancakes. Though the division of labor in the household was mostly typical of 1960s America with my mom doing most of the cooking and cleaning, my dad did pitch in, and he seemed to enjoy cooking. Now here you might expect a pancake recipe, but they used Bisquick!

I remember a bit more of our next home on “Teacher’s Row” in Clarendon Hills, IL. My dad had been hired to teach French at Hinsdale Central High School which allowed new staff to rent one of several houses the district owned for a bargain price for up to 3 years. One memory I have is of biting into a brown crayon to see if it was chocolate! No, it was nasty, and I spit it out. I also have some faint memories of playing with the boys next door, tearing around with tricycles and wagons. It may have been for my 3rd birthday that my mother made an awesome Christmas tree shaped cake. Maybe I saw photos of it later, but I think I might actually remember it because it was pretty special.

We moved again before the 3 years were up, and before I started kindergarten, just across town to the ranch house that is still my dad’s home. Diane and I soon found friends across the street.  The Glovers had 2 daughters our age, Kathy & Julie, plus they had a younger brother and sister, and then later, twin baby brothers. Grab a couple other kids from the block, and it was easy to have team games like “Red Rover” in our backyards. Sometimes we pestered some unfortunate older boys whose mothers made them play “cops & robbers” with us. Other times we were inside doing quieter things like playing with dolls, having a pretend hospital or coloring. Yet I seem to remember a lot of time spent outside. In addition to the games and bike riding, we sometimes acted out fairy tales or made things out of the grasses and brush in the Glovers’ lower yard. It was on a hill and terraced, so the upper 2 levels were like normal suburban backyards, but the lower one was allowed to be wild.

All that activity gave us pretty good appetites, and I don’t remember anyone being truly fussy. We also walked to and from school, and in those days we came home for lunch. Soup and sandwich was a fairly common one for us. Maybe sometimes the soup was this one from my grandmother Gladys Lutz Nelson. However, I think we had it more often on Saturdays when my mom could get Diane and me to help make  the croutons.

Fry bacon and onion together in large saucepan. Drain fat.

Add potatoes and seasonings and enough water to cover. Bring to a boil and cook until potatoes are tender.

Reduce heat. Add milk and heat through. Serve with croutons.

Chapter 2 - Sisterhood by Nicole Marie Masika is licensed under a Creative Commons Attribution-NonCommercial-ShareAlike 4.0 International License, except where otherwise noted.