Computers were originally created for military, scientific, government and corporations – organizations with one common characteristic – large budgets! Fortunately, since the early days of computing, computers have simultaneously become more user-friendly and affordable giving rise the era of personal computing.

Personal Computers (PCs) are best described as small, inexpensive computers designed for individual use. Each of the following are examples of personal computers: 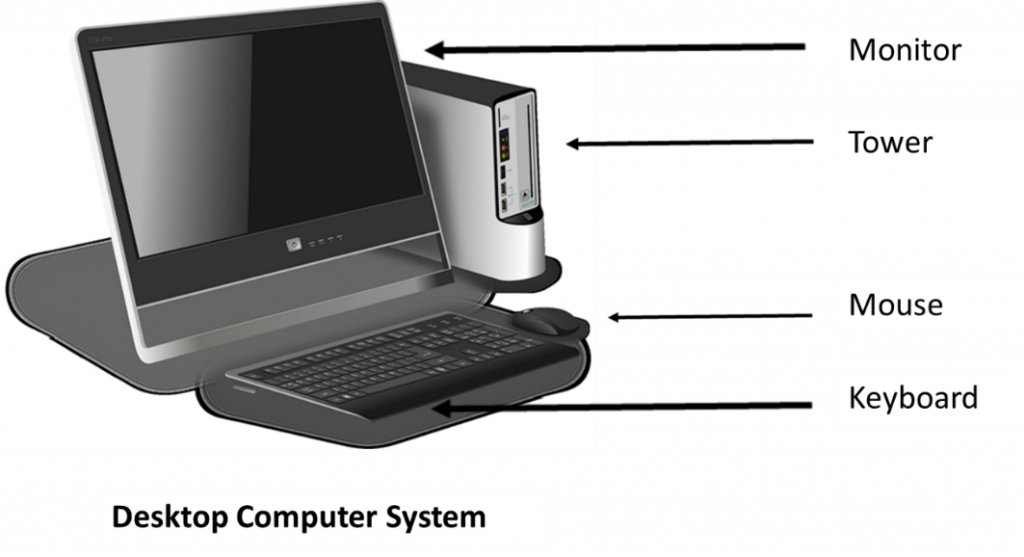 Modern desktop and laptop computers are generally either PCs, usually running a Microsoft Windows version operating system, or Apple Macintoshes, which run Apple’s proprietary operating system (OS) software. Various versions of the Linux OS also represent a relevant share of desktop and laptop users on a PC platform. However, according to several industry analysts, Microsoft’s Windows is the dominant OS in terms of shares of users, with estimates of more than half of all users in 2016. 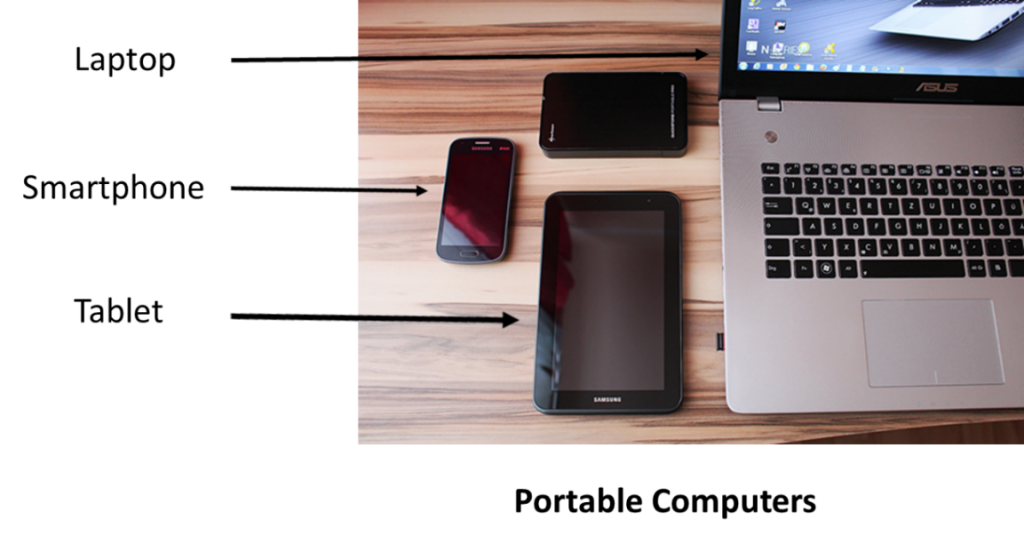 Computer systems consist of hardware and software. Hardware is the tangible, physical components of a computer, while software is the intangible programs that function on a computer. Basic hardware components include a hard drive for storing data, a processor for performing operations, memory for holding active data, and a 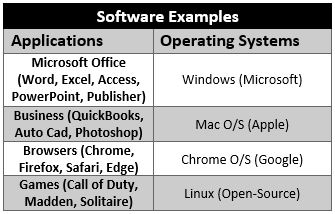 motherboard to tie the parts together. Even gaming consoles are considered computer hardware. Software includes computer programs, libraries and data. Software can be categorized as application (most programs), system (operating, utilities and device drivers) and malicious software, or malware (undesirable programs that results in harm or disruption).

Hardware and software work together to process data. When you open a software program, the computer reads its data from the hard drive or input device, runs the software on the computer’s processor and then displays the results on your output device or saves the data to a storage device.

Hardware components that are not an integral part of the central processing unit are often referred to as peripheral devices. Peripheral devices connect with a computer through several I/O interfaces, such as communications (COM), Universal Serial Bus (USB), firewire, and serial ports. Peripherals are usually used for either input, storage or output.

An input device is any device that provides input to a computer. There are many input devices, but the two most common ones are a keyboard and mouse. Every key you press on the keyboard and every movement or click you make with the mouse sends a specific input signal to the computer. Examples of commonly used input devices include:

One of the first steps to securing assistance with computer-related issues requires sharing the error or screen output with a teacher or technical support staff. Often, these support resources are not available to view the screen in-person. Therefore, capturing the screen output is a vital skill to help resolve computer issues. Screenshots, also known as screen captures, screen grabs, or print screens, are the technical terminology assigned to this piece of data. A screenshot is a digital image of what appears on a computer or television screen. Producing a screenshot can be a confusing task, which should be broken down into two parts. The first part is the capturing of the screen image, while the second part is the process of pasting the capture into a storable file. There are numerous methods of capturing a screenshot, and they vary from one computer device to another due to operating system versions and keyboard differences.

The most consistent method for Windows users to create screenshots is by utilizing the Windows Snipping Tool. As of late 2018, the new tool is called Snip & Sketch. Most images in this documentation have been generated with the help of these tools. To open the Snip & Sketch tool, select the Start button, type “snip” in the search box on the taskbar, and then select the

Snip & Sketch app from the list of results. In addition to capturing a full-screen snip, the Snip & Sketch Tool provides the convenience of capturing a more specific “snip” of data by using the mouse to draw a rectangular or free-form block of specific data to be captured. This allows for more focused data to be collected versus an entire screen of potentially competing images. Once the drawing is selected, the screenshot should automatically open in a new window. You can modify the screenshot by cropping, highlighting annotating or drawing on the image. This image can then be pasted into a new program (similar to how the above image was added to this document) or saved as a separate file to be stored on a permanent or cloud storage device. The Snip & Sketch tool also be set to a timer to take a screenshot in three or ten seconds. To take a screenshot with Snip & Sketch, just press PrtScn. Screenshots will be quite useful for providing feedback or asking questions to/from students/teachers, particularly in distance education environments.

One of the many attributes of being a successful college student is evidence of time management, communication, and organization skills. Managing the files on a computer is essential to excel at all of these skills. Almost all courses require a computer to access and communicate information. The inability to locate a file on a computer or course management system (like Brightspace D2L or Blackboard) could result in a late or missing assignment, missed conversations with an instructor or classmate, and/or tremendous stress.  The primary solution to enhanced computer organization skills is through increased knowledge of Windows’ File Explorer tool (formerly known as Windows Explorer).

File Explorer displays the hierarchical structure of files, folders, and drives on your computer. All data, including applications, program files, etc. is stored on the computer’s disk (also known as disk drive). The primary internal hard drive is known as the C: drive. The contents of a disk are organized into individual files within individual folders. The Document folder is a general storage location for files created in programs like Microsoft Office, whereas photos downloaded from the Internet or a camera are typically stored in the Pictures folder. The Quick Access section displays frequently used folders and files, whereas the This PC view displays information regarding the computer’s storage capacity, and attached storage devices, including optical media.

To access the computer’s files, click Start > File Explorer or select the File Explorer icon located in the taskbar. Upon launching File Explorer in Windows 10, the Quick access window will open. Previously known as “Favorites” in previous versions of Windows; this is where users will see their most frequently accessed folders and files that have been created.

The File Explorer window can be broken into the following sections:

The Search box is an underappreciated tool to help find files that can’t be found in their presumed location. Use the asterisk (*) wildcard character to expand the search results. i.e. Plane* will find files with the words plane or planet, and more. The File Explorer contains an array of tools which can help manage files and stay organized!

Creating a custom hierarchical structure of folders for each semester and each course is considered a best practice for organizing college data. For example, create a folder with the name of the current semester, i.e. 2018 Fall. Within this folder, create subfolders for each course, i.e. MIS1100. Descriptive folders and file names also diminish confusion when trying to find files on a computer disk.

File Explorer is the primary tool for copying, moving, renaming and searching for files and folders. The View tab provides display and sorting options for files and folders. Viewing files using the Details layout allows for quick sorting by simply clicking a column header to toggle between ascending and descending order. The sort order in the above illustration is sorted by Name in ascending order. Clicking the File name extensions checkbox helps identify the source program for each file, particularly if the Type column is not displayed. Perhaps the most useful column is Size, which can be helpful to determine if a file is too large for distribution via e-mail or portable storage methods.

One of the most common operations for users is copying files, which creates a replica of an original file. To copy a file, select the file you want to copy and click Copy under the Home tab. Moving a file necessitates substituting the Copy button with the Cut button. Moving a file saves hard drive space by not creating a duplicate file. To add a new folder, right click and choose New > Folder from the Shortcut menu. Conversely, to delete a file or folder, right-click the object and choose Delete from the shortcut menu.

Business Computers 365 by Marcus Lacher is licensed under a Creative Commons Attribution-NonCommercial-ShareAlike 4.0 International License, except where otherwise noted.